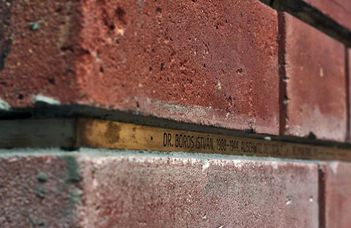 In the autumn of 2014, the Faculty erected a monument in the Trefort Garden honouring its past instructors, students, staff members and all those who lost their lives as a result of Hungary’s anti-Jewish laws in forced labour, concentration camps, ghettos or military service.

The winning bid was designed by the “MM Group” whose members include architects Ildikó Bujdosó,  Eszter Lukács,  Nóra Szigeti,  Dénes Fajcsák,  János Roth and Levente Szabó, students and masters of “ÉME Master School” Cycle XXII, as well as Farkas Albert sculptor. Their entry is entitled “Names in the mortar joints”.

On October 5, 2015, the monument was awarded the Niveau Prize of the Budapest Architect Chamber, certifying it as one of the country’s best architectural works of the previous four years. In 2015, the Budapest Architect Chamber founded the Niveau Prize to recognise the capital’s most outstanding architectural works and architects. The judges found all 46 valid bids – representing buildings constructed over the previous four years – to be high quality entries. Five architectural works received awards and a further nine were voted to be mentioned as candidates. The Trefort Garden Monument was one of the five works to receive the Niveau award.

The Media's Architectural Prizes were handed out at the Uránia National Film Theatre on October 16, 2015. The prize recipients were selected by Indira van't Klooster, Diogo Seixas Lopes, one of the chief curators of the Lisbon Architect Biennale, and Andrija Rusan, editor-in-chief of the ORIS magazine for architecture. The Special Prize of the international jury was awarded to the University’s monument honouring the instructors and students who died during the Holocaust and World War II, which the panel described as “a work situated on the border between fine arts and architecture”.

The double volume book Bevésett nevek (“Carved Names”) was presented on November 17, 2015. Its first volume features a collection of the bids submitted for the competition to design Eötvös Loránd University’s Holocaust and World War II monument, while the second contains the lectures of the conference organised for the inauguration of the completed monument.

We use “cookies” on the website to provide the best user experience to our visitors in addition to secure browsing. You can change your cookie settings at any time in your browser settings. More information